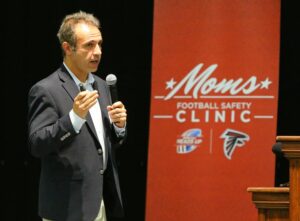 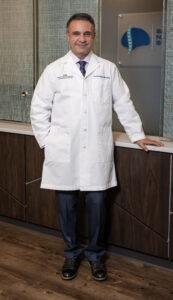 Dr. Khajavi received his undergraduate degree from Emory University in 1985, and his medical degree from Georgetown University School of Medicine in 1989, through a scholarship from the US Air Force. He completed his neurosurgical residency at the Cleveland Clinic Foundation in 1996. Dr. Khajavi returned to active duty and served in the Department of Neurosurgery at Walter Reed Army Medical Center. Dr. Khajavi was the first Air Force officer to ever be given an appointment in the department of Neurosurgery at Walter Reed. While there he served as the Chief of Epilepsy and Functional Surgery sections. He held an appointment as Assistant Professor of Surgery at the Uniformed Services University of Health Sciences, and also held a secondary appointment in the department of Neurology. He returned to Atlanta in 2002 and founded Georgia Spine & Neurosurgery Center in 2003, which is now located on the campus of Northside Atlanta hospital.

Dr. Khajavi is a recognized leader and innovator in the field of minimally invasive spine surgery. He has also cultivated an expertise in the fields of complex spine surgery and sports neurosurgery, including the management of concussion and sports related traumatic spine injuries. Dr. Khajavi has published numerous scholarly articles and book chapters in the fields of spinal and brain disorders and has garnered national recognition for his contributions to the field of minimally invasive complex spine surgery. He also remains active in clinical research and teaching, and travels frequently to teach the latest surgical techniques.  He currently holds clinical faculty appointments ninth departments of physical therapy at Mercer and Georgia State Universities.

Dr. Khajavi serves on the advisory boards of the non-profits Brain Injury Association of Georgia and Kids & Pros.  Dr. Khajavi is also the founder and chief medical officer of StartBox®, a cloud based system to make surgery safer.  He holds over 20 patents related to surgical devices and safety.

Dr. Khajavi resides in Atlanta with his wife and 4 children.  He enjoys exercise, travel, reading, classic cars, and spending time with his family.